After a long wait, my picture of the Queen’s Diamond Jubilee Pageant, viewed from the Mermaid Theatre’s Radio 2 studio, is going to be on show in Battersea 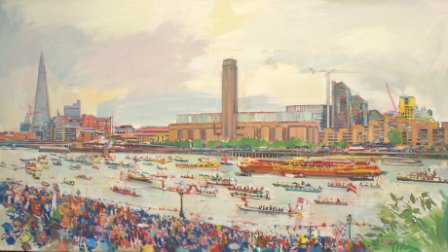 …and with a snappy title for a blog entry like that, who would not want to read further?

I have been asked to contribute to a show which is part of the Thames Festival, and the show opens next week at the Pumphouse Gallery in Battersea Park.

The picture itself was done in the studio, but I also did a study which was done on the day itself in the Radio 2 temporary studio in the Mermaid Theatre, which had a great view and, most importantly, was dry!

You can get more info on the Thames Festival itself and details of the show’s opening times from the website- www.thamesfestival.org