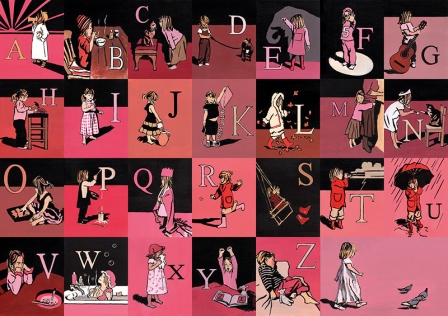 Is it just me or is that goose looking fat?

If you have godchildren or grandchildren to buy Christmas presents for…or even your own children, who knows- I am pleased to announce that you can now buy my alphabet series as limited edition prints. Click here for full details.

At the AGM of the Chelsea Art Society (my first as Pres.) I discovered what it means to be roasted…not just by the very effective gas fire which sputtered away about a foot away from my legs as I stood facing the assembled ranks of our members in what used to be Sargent’s studio (about half the membership turned up which was fantastic), but also by some probing questioning which I think was ultimately useful for all of us. I am pretty green when it comes to chairing AGMs. In fact, I am basically still a seed in the ground…greenness might come later if I can just reach the light…! Anyway, I am very thankful for that good turnout, as the CAS has much to offer and a great future ahead, it’s just that we are also trying to work out how to grasp it. No less an authority than Ken Howard had simple but beautifully effective advice- get everyone to put their best work in, and then you will make some sales. It sounds so easy, doesn’t it!

I will give this my best shot, rest assured. Julian Barrow’s are big shoes to fill, but his passing also creates an opportunity to something different and good in its own way.

In the meantime, I have just loaded up a lot of new pictures to my gallery. Despite selling well at Panter and Hall in October, there are some pieces back here with me now, and also a bunch of oils which were not completed in time for the catalogue and therefore never made it to Pall Mall. Anyone with a significant Christmas present in mind might find something nice in my little shop.