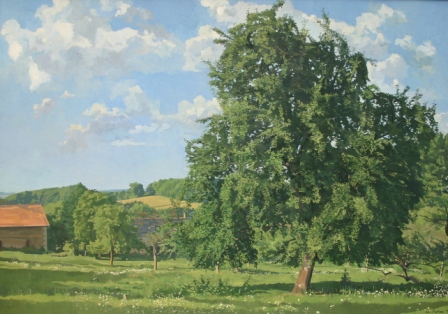 I have been lazily ignoring my aim of posting to my blog every 2 weeks. Too busy having my head turned by other social media platforms. That’s the trouble with your typical artist… flaky.

Anyway, I was thinking this morning about Normandy, where I spent an idyllic six months in 1996 as a student, painting in a barn, in an orchard, in the depths of the beautiful countryside near Alencon. This picture was done at that time, and subsequently bought by Major General Sir Charles Harington from an early group exhibition in aid of the Cystic Fibrosis Trust.

People have all sorts of reasons for buying a picture. His was that he had fought in the bocage in the summer of 1944. Presumably he had lost friends and had a pretty terrifying and difficult time of it. I’ve read Max Hasting’s book and the battle for Normandy was not won without a fight and a great deal of sacrifice. Anyway, I think, and we can’t ask him now because he is no longer with us, that Sir Charles had strangely happy memories of that time. It was exciting, he was in a band of brothers, he was changing the world for the better. It’s just people were shooting at him and trying to kill him. Funny, how positive his feelings were and how he remembered above all how goddam beautiful the June countryside was as they took it, field by field, hedgerow by hedgerow, the very terrain being the reason for such slow progress.

For a flaky artist this is humbling stuff. And I have happy memories of Normandy, too. Already a long time ago.